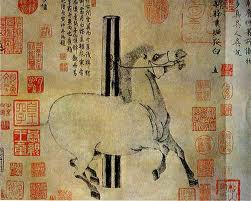 The setting sun is like a fireball in the sky. There is a gentle breeze and the soft undulating hills of ancient China, look like a green carpet has been spread over them. Suddenly, as if out of nowhere, a stunning, pure white steed appears like an apparition on the horizon. As the majestic horse canters freely every muscle in his body ripples and his beautiful mane blows in the wind. This spirited steed is 'Night – Shining White'. He is the favourite imperial stallion of Emperor Xuanzong, of the Tang dynasty. There is something more than the sheer physical beauty of this animal; it is his spirit, which epitomizes the Chinese myth about imported ‘celestial steeds' that ‘sweat blood’ are really dragons in disguise. It is the eighth century, and Tang China is one of the greatest empires in the medieval world. Emperor Xuanzong, is referred to as the ‘brilliant monarch ‘and his reign is rightfully ranked as the classical period of Chinese art and literature. 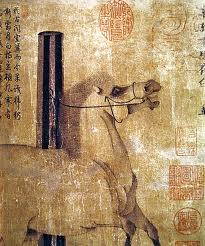 Han Gan is the leading horse painter of the Tang dynasty. He spends a lot of his time in stables painting horses. One evening as he's on his way home he happens to see something spectacular; Night –Shining White galloping in a thicket of bamboo trees.

What we see here is that moment captured by the artist. He's not only captured the physical likeness, but also the spirit, energy and life force of this fiery-tempered steed, with a burning eye, flared nostrils and dancing hooves. He's achieved this with the most economical means; brush, ink on paper.  This sensitive, precise drawing, reinforced by delicate ink shading is an example of ‘baihua’ (white painting). A term used in Tang texts to describe monochrome painting with ink shading. He rejected the use of colour. He thought of colour as a distraction. He rejected the use of light and shadow as a means of modelling and didn't use opaque pigments to conceal mistakes. Instead, he relied on the 'line' as a form in itself - the indelible mark of the inked brush to capture this emblem of China’s military strength. 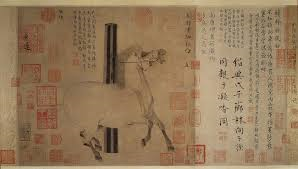 The Chinese way of appreciating a painting is often expressed by the phrase ‘to read a painting’. The question is, how does one do this?

Night –Shining White was originally just a little more than a square foot in size and is now mounted on a hand scroll that is twenty feet long.  This is a result of a myriad of inscriptions and seals (marks of ownership) that have been added to the painting and its borders by later owners and experts over centuries, recording over a thousand years of transmission of ownership. Some painted on the surface itself, making the horse look a little overwhelmed by this enthusiastic display of appreciation. This is a distinctive feature of Chinese collecting and connoisseurship and offer testimony of an artwork’s continuing impact on later generations. Han Gan’s, Night- Shining White is regarded as the best known horse painting in Chinese art. Therefore, to read a Chinese painting is to enter into a dialogue with the past, and the unrolling of the scroll provides a physical connection with the work of art.


Emperor Xuanzong, was unable to sustain the glory of his empire. Unfortunately, because of his obsession with a concubine he neglected his empire and eventually lost his throne. We do not know what happened to Night-Shining White, but rumour has it that on certain nights even today, when the sky is full of stars Emperor Xuanzong’s celestial steed can be seen galloping across the night sky.