Showing posts from July, 2014
Show All

It’s pasI The time is well past midnight but sleep evades Bernardo. He turns on his back and looks up at the night sky, staring thoughtfully at the stars that look like tiny jewels. He thinks of home and how he celebrated his seventeenth birthday just a few days ago. Looking around at the small forested area he feels a sudden shudder as he realizes there are just a few hours left before he   joins the other foot soldiers and goes into battle. On the 1 st of June 1430, Bernardo fought in the Battle of San Romano. This battle was fought between Florence and Sienna, about thirty miles outside Florence, it lasted the entire day and the outcome is generally considered favorable to the Florentines. The events of that day from dawn to dusk, have been portrayed in a set of three paintings each over six feet high and ten feet wide in the famous painting known as the, ‘Battle of San Romano’. This masterpiece was created by the much respected artist of the early Italian Renaissance,
Post a Comment
Read more 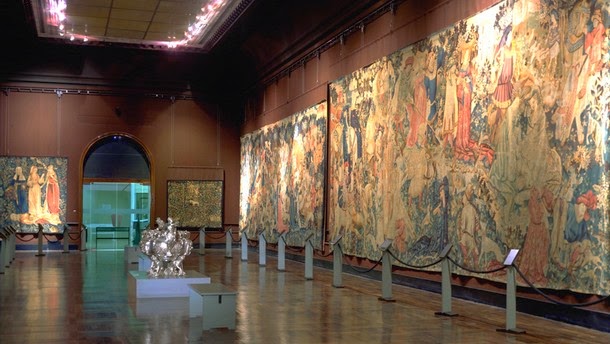 The Devonshire Hunting Tapestries on display   Two noblemen on horseback accompanied by their servant and hunting dogs move towards the female bear. She has been flushed out of her cave with her cubs. As the cubs escape, one of the noblemen puts a spear into her chest, while she grapples with the hunting dogs the other nobleman gets ready to deal a deathly blow with his sword. It is hunting season in the fifteenth century and the Dukes of Devonshire are in their element. Hunting in the middle ages was more than a mere pastime. The elaborate rituals were an integral part of court etiquette, and being skilled in hunting was the peacetime equivalent of being masterful on the battlefield. This passionate love of hunting is reflected in the scenes woven into tapestries known as the ‘Devonshire Hunting Tapestries’. These tapestries from the estates of the Dukes of Devonshire, woven in Arras in modern France are over a hundred and thirty three feet long. Tapestries were very expensiv
Post a Comment
Read more
More posts