A Picture in Over a Million Pieces 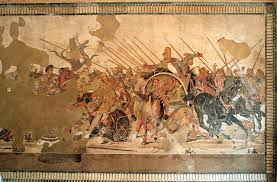 It is a little after eight p.m, on a cool summer evening, when the first guests start arriving. The venue is the aristocratic, ‘House of the Faun’ Pompeii, named after a statue of a dancing faun in the courtyard. It is 300 BC and the ancient city is at its glorious peak. The parties at this residence are famous for their extravagance and as always,the guest list is extremely high brow.


As the guests walk from the outer courtyard towards the inner courtyard they slow down and stare in awe at a magnificent floor mosaic surrounded by columns. The mosaic depicts the battle between Alexander the great and Darius the king of Persia.  This ambitious work of art is 8ft. 11 inches in height and 16 ft. 9 inches in length. It is made with a million and a half pieces of tiny coloured tiles of stone and glass called 'tesserae', arranged in gradual curves known as ‘worm work ‘because they seem to replicate the slow motion of a crawling worm. The contrast between the stone and glass (dark and light) gives the mosaic a three dimensional effect. The guests are mesmerised 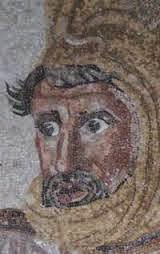 The scene is equally dynamic, as it is the turning point in the battle, widely believed to be the Battle of Issus in 333 BC. The viewer is immediately drawn into this tense moment when the great ruler of Persia turns and flees. He has just ordered his troops to retreat; the Persian guards’ spears are still facing the Greeks but just at that moment the chariot is being spun around. The centre of the mosaic is dominated by Darius. We see his eyes open wide in horror as he looks towards the left and sees one of his soldiers pierced by Alexander’s spear. The dying man is still gripping the deadly weapon as though he wishes he could pull it out of his body as he collapses on the bloody corpse of his black horse. Darius’s stare is also directed towards Alexander as though pleading with him to spare his soldiers.  Since Darius is not fighting himself he appears as a passive victim of the general horror around him. 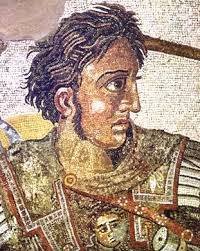 In contrast, the Macedonian king is actively directing the battle. Astride his famous horse Bucephalus, he strikes the enemy through the body without as much as a glance at his victim. His widened eye is fixed on Darius; even the picture of Medusa the gorgon on his breastplate turns her view sideways to the horrified enemy. The Macedonians can be recognised by their bonnet shaped helmets around Alexander. The majority of the picture belongs to the Persians, wearing their plate armour which covers their whole body. Created in radical foreshortening, is a figure of the horse in the centre, which shows the knowledge the ancient Greeks had of the anatomy. The most heart wrenching scene for me is the face of a dying man, who has just been run over by Darius’s chariot, reflected in his shield. He stares at it, watching himself die and his reflection is the only thing that looks at the onlooker. The use of shading conveys a feeling of mass and volume, enhancing the naturalistic effect of this scene. 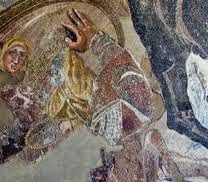 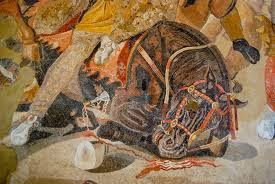 The party is a huge success, and ends after a night of merry making. Unfortunately for Pompeii, its end was tragic. The entire city was almost completely destroyed, buried under four to six meters of ash and pumice in the eruption of Mount Vesuvius in 79 AD.
The Alexander Mosaic was found during the excavation of Pompeii in 1831, in the House of the Faun. Created in the third century BC, based on an original no longer in existence. Today, it is considered one of the most famous Roman mosaics of that period and is on display at the National Museum of Archaeology in Naples. An exact copy, identical in shape, size, colour and materials was created in 2005 and is now installed in the House of the Faun in Pompeii.