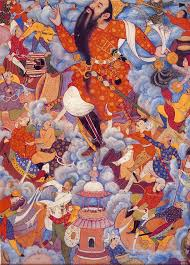 As night falls the caravan of camels inches its way along the narrow mountain pass of the ancient silk route. It has been a long and tiring day for the travellers. To their relief they see the flickering lights of the Caravanserai in the distance.


Once they reach the Caravanserai, their camels are fed and led away to rest for the night.  The tired travellers freshen up and then get together with travellers from other caravans passing by in the common area, to eat, drink and exchange stories.  Smoke from the hookahs fills the air, and the music is relaxing. In the corner there is a roar of laughter as the storyteller rolls his eyes in an animated manner. The travellers join the group. The storyteller is relating the colourful, action filled adventures of Amir Hamza.


Amir Hamza, the hero of these stories was the uncle of Prophet Muhammad. The stories known as the ‘Dastan-e Amir Hamza’ are action filled tales of giants, sorcerers and demons. Hamza and his brave companions travel the world vanquishing evil and spreading the teachings of Islam.


These fantastic tales of the adventures of Hamza captured the imagination of the young Mughal emperor Akbar. Not only did he recite them personally, he commissioned them to be compiled into the first royal manuscript to be illustrated in India during his reign (1556-1605). This manuscript came to be known as the ‘Hamzanama’.


The silk route which had existed for centuries, was the trade route linking East Asia to the Mediterranean.Apart from trade this route was also used by travellers, which allowed the exchange of religious, cultural and artistic ideas and traditions. The rich literary and artistic content of Akbar’s Hamzanama was inspired by these exciting exchanges.

The Hamzanama was written in Persian and Urdu. It took fifteen years to complete this great book. Apart from the text it includes fourteen hundred full page paintings, 27 inches X 20 inches in size. These paintings were done on cloth and the complete Hamzanama was finally produced in twelve to fourteen volumes. The layout is simple with the illustration on one side and the text on the other.


The paintings are a complete fusion of Persian and Mughal styles. They were made in a imperial workshop. About thirty main artists were used and over a hundred men worked on various aspects of the book. Initially there were two main artists from Persia, Mir Sayyid Ali and Abdus Samad, but due to the large scale of this commission they had to train more than a hundred artists, many of them were Hindu painters from Gujrat. This amalgamation of different cultures gave birth to a wonderful combination of Persian, Central Asian and Indian styles of painting that we see in the Hamzanama. 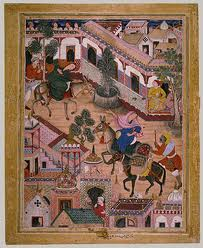 In the illustrations we see two worlds of the Mughals, India and the Persian world of Central Asia. Some illustrations are very Persian in style. The ornate architectural settings, flat linear forms which are geometrically perfect, the finely patterned carpets, tiled roofs, fairies and flowering cherry and Cyprus trees. 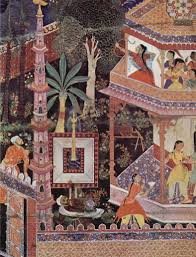 Along with these illustrations we see paintings which are purely Indian in spirit. The figures are wearing Indian clothes and their gestures are typically Indian. The palette in these paintings is brighter and more dramatic; there is a love for the natural world which is very specific to India. 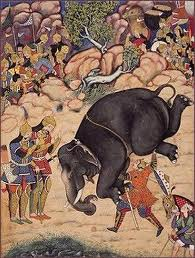 When we look at the playful elephants that charge across the illustrations of the Hamzanama, we can see a direct influence of the Hindu rock sculptures.

Hamza and Umar exchange insults with Ghazanfar and challenge him to a battle outside the fortress of Armanus:


As Hamza and Umar explore a fortress, the local ruler Ghazanfar hurls drunken curses at them. While Umar replies to the taunts Hamza challenges Ghazanfar to demonstrate his manhood in battle. The impudent infidel is defeated quickly by Hamza and Umar cuts off his tongue. They then force Ghazanfar to swap his armour with Hamza, who drags the disguised and mute Ghazanfar towards the citadel and shouts that he has taken Hamza prisoner. As soon as the gates open, Hamza and his men seize the fortress.


Zamurrud Shah reaches the foot of a huge mountain and is joined by Ra’im Blood Drinker and Shining Ruby:


Zamurrud Shah: A gigantic figure, lord of the East and perennial enemy of Hamza.


After being defeated on the battlefield once again, Zamurrud Shah slinks into the night. He travels alone for nine days, finally camping at the foot of an enormous mountain. Here he begins to recuperate, eating fresh game from a hunt and receiving his followers. Rahim Khun – known as Ra’im the blood drinker and Yaqut Daraksh – known as Shining Ruby are the first ones to renew their allegiance with him. Soon many others join him and Zamurrud Shah plots and plans his next move with them.


Zumurrud Shah falls into a pit and is beaten up by suspicious gardners:


After suffering a terrible defeat at the hands of Hamza’s army, Zumurrud Shah now has to endure another humiliation. He stumbles into a deep pit which has been dug by some gardeners who are trying to catch the culprit who has been raiding their groves. The gardeners had suspected some bears but they find a wretched giant instead. They beat him despite him pleading his innocence. Finally the gardeners allow Zumurrud Shah to come out and explain himself, but they get irritated again when he claims to be the lord of the east, which seems like a preposterous lie.


The boisterous laughter, the animated storytelling and business negotions continued late into the night at the caravanserai. The silk route served as a trade route till the early sixteenth century, after which trade began to be carried out by sea routes, which were a faster and relatively cheaper option.

Unfortunately, only a little over a hundred paintings of the Hamzanama survive today. Of these sixty one paintings are in the Austrian Museum of Applied Art in Vienna, the rest are spread over many collections at  the Victoria and Albert Museum and the British Museum in London and some at  the Metropolitan Museum in New York.
References:!) The Adventures of Hamza, 2) Wikipedia