Young Citlali climbs up to the upper deck of the ship to get a better view of the night sky. He looks up at the star laden heavens and smiles. His name means 'Star' in colloquial Nahuatl. He takes a deep breath and enjoys the cool sea breeze. The year is 1541 and the ship is sailing to Spain, it's laden with expensive gifts and jewels for the Spanish king, Emperor Charles V. However, the most precious object on board that ship is an Aztec codex called the 'Codex Mendoza'.
Suddenly Citlali hears a gun shot followed by another one in quick succession. He turns around and sees a French pirate ship close on the starboard side. He quickly sounds an alarm but its too late. The pirates are already aboard. A fierce fight takes place late into the night and Citali is fatally wounded. After a fierce battle, the pirates take over the ship and plunder everything on board. The Codex Mendoza never made it to Spain. It ended up in France instead.

In France, the Codex was acquired by Andre` Thevet, the cosmographer to King Henry II. Thevet was so impressed by the detailed text and illustrations of this Codex that he wanted to be associated with it and wrote his name in five places, including the top of the cover (pictured above).

After the Spanish took over the Aztec empire, the first viceroy of New Spain, Antonio de Mendoza commissioned a Codex in 1541 to record information about this fascinating culture. This codex has since come to be known as the 'Codex Mendoza'. He intended to send it to the Spanish King for him to get a better understanding of the Aztecs.
Indigenous artists and scribes used coloured pigments and ink to create this pictorial manuscript, which is in a book format composed of seventy one folios. Each page measuring 30 by 21 centimeters of European paper. Creating the codex was full of intricacies and involved people with multiple skills working together. First the artists recorded information about Aztec history, culture, religion and the tributes paid by each town of the 'Triple Alliance' (a military and political alliance among the three groups living in the basin of Mexico, today's Mexico city). This information was then represented pictorially by them, leaving blank pages in between their paintings. In the second step the narrator provided an oral account of what the drawings represented in 'Nahuatl', the spoken language of the Aztecs. Then someone who the codex refers to as the 'interpreter' translated this speech into oral Spanish and finally a scribe wrote down the lengthy text on a page adjacent to the images it represented. The final manuscript was reviewed by an additional person who corrected errors in the Spanish text and wrote a concluding commentary about the document's production. The codex also gives the reader an introduction to Nahua pictographic writing. 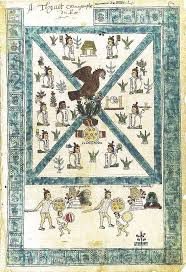 The codex's front piece contains information about the organisation and foundation of the Aztec capital, Tenochtitlan. It was established in the middle of Lake Texcoco in the valley of Mexico in 1325.The front piece has a diagram of the city, it is divided into four parts by intersecting blue - green undulating diagonals. The city was made up of canals and divided into four quarters. This division was intended to mirror the organisation of the universe believed by the Aztecs to be four parts aligned with the four cardinal directions, North, South, East and West.

At the center of the page is an eagle on a cactus growing from the middle of a lake. According to the Aztec myth, their patron deity 'Huitzilopochtli', told their ancestors to leave their ancestral home of Aztlan and look for a place where they saw an eagle on top of a cactus growing from a rock. He told them wherever they see this sign they should settle and build their city. It is believed that the Aztecs saw this sight in the middle of Lake Texcoco and established their capital Tenochtitlan on an island in the lake. The cactus on which the eagle sits also symbolises the name of the capital, which translates into,' the place of the prickly pear cactus'. Today's Mexican flag has an eagle on a prickly pear cactus, growing on a stone in the middle of a lake, relating back to the mystic origins of  the Mexican capital.

Below the cactus and stone we see a war shield indicating that the Aztecs did not settle peacefully in the Valley of Mexico. The simple structure above the eagle symbolises their main temple in the heart of the city. To the right of the eagle is a simplified skull rack, to show the fate of their war captives and the importance of human sacrifice in their society. Different types of plants and grain including maize or corn dot the city's four quadrants indicating the agricultural fertility of Tenochtitlan.

Ten men are also depicted in the four quadrants wearing white garments with top knots in their hair.

These are the figures of the men who led the Aztecs to this island location. Their name glyphs (art in the form of a symbolic figure) are attached to them by a thin black line. One man is different from the rest. He's seated to the left of the eagle, has grey skin, a different hairstyle and a red mark around his ear. He's a priest and the blood from his ear is an offering to the deities. His skin is grey because it's covered with ash. The speech scroll coming out of his mouth and the woven mat on which he sits indicate his high status as well.
Surrounding the entire page are year glyphs, beginning on the upper left and running anticlockwise.

Below the diagram of the city are two scenes of military conquest. The Aztec soldiers, identified by their shields, physically tower over the two defeated men. The artist emphasises their military superiority through these proportions.

The codex is divided into three sections. The first section is in sixteen pages and presents a history of the Aztecs, from the founding of the capital city Tanochtitlan in 1325 to it's fall in 1521. This is their political and military history organised chronologically, according to the reign of each emperor. It provides the dates of his rule through blue coloured year glyphs and names of the towns he brought into the imperial fold. (Paintings below)


Conquests of Chimalpopoca (Smoking Shield). The third king of Tenochtitlan

Conquests of Ltzcoatl (Black Serpant). The fourth king of Tenochtitlan.

Conquests of Axayacati ( Face of Water). The sixth king of Tenochtitlan and the ruler of the Triple Alliance.

The second and longest section is in thirty nine pages. It is a list of towns conquered by the 'Triple Alliance' and the tributes paid by each of them. It is organised by region and specifies items such as textiles, fine feathers, animal skins, precious stones, gold mantles and cocoa beans among other things. As in the first section the content, format and style are very structured. Towns are listed in the margins starting at the top left and move in an anticlockwise direction around the page.

Tribute items occupy the majority of the page accompanied by glyphs indicating quantities, arranged horizontally on the page. Clothing and textiles are always at the top of the page, military insignia,warriors uniforms and shields are at the center and food items, grains and other miscellaneous items are at the bottom of the page. 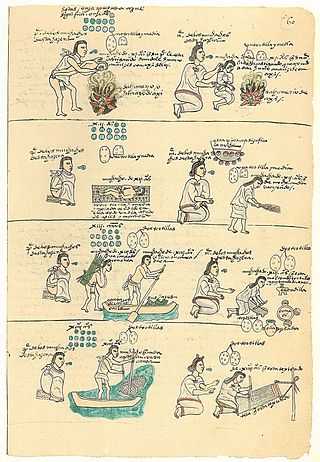 The third section, is in sixteen pages and describes Aztec social life. The upbringing of boys and girls until the age of fifteen, when girls should marry and when boys should enter a trade or specialise in military schooling. The blue stones on the top right hand corner signify the age of the children. This particular page contains information about their  eleventh, twelfth and thirteenth years. In the top segment we can see the father holding his eleven year old son over the smoke of burning red chilies as punishment.On the left side the mother threatens her daughter with similar consequences if she misbehaves.In the second segment the children are twelve years old. This segment also deals with punishment. On the left hand side the father watches his son, whose hands and feet are tied, lying down on a mat the whole day. On the right hand side a mother makes her daughter sweep through the night.  This section also contains information about various occupations, including depictions of military orders and their uniforms, information about governance, old age and death. It provides a unique glimpse into their private and public rites including human sacrifice. 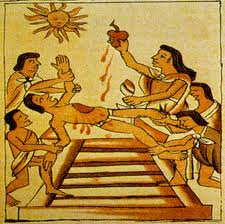 They believed that human sacrifice was important to keep the gods happy and only if the gods were offered the human heart, would the sun continue to rise and set and the rains continue to fall. As a result of this belief people were sacrificed on a daily basis.

After being in the possession of Andre`Thevet, the Codex Mendoza changed many hands.In 1659 it finally reached the Bodleian Library at Oxford University in the United Kingdom and has been there ever since. It was removed from public exhibition in 2011.

The ritual of human sacrifice which resulted in the killing of thousands of people was very detrimental for the Aztec society. Their continuous wars with their neighbours and the spread of the smallpox epidemic made it easy for the Spanish to conquer the Aztecs. In 1521, this great, highly successful and very wealthy empire vanished forever from the face of the earth.

References: Smart History, Academia: History in Pictures
Posted by preetiphilip.blogspot.com at 04:11 No comments: