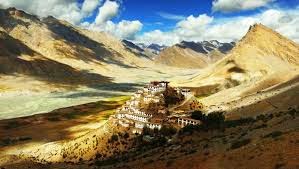 Fourteen year old Lobsang looks out of the monastery window. He can see the vast expanse of the snow-capped Himalayas in the distance. It was about seven years ago that his parents sent him here to join the order of the Buddhist monks. Gradually over the years the monastery has become his home and the other monks his family, his earlier life is now nothing but a distant memory.   Lobsang, leads a very regimented life in the monastery and spends a lot of time studying under the guidance of a very senior and learned Lama. He is waiting for his teacher; today’s class is on Buddhist art. He wishes he could go out and play with his friends instead, but he hears his teacher approaching and runs and sits down on his mat. 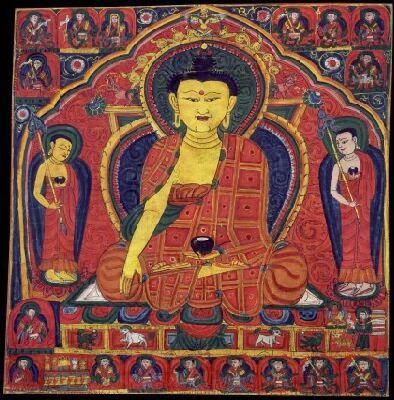 Lobsang’s teacher is an elderly Lama. He is a very kind and gentle person and is like a parent to him in many ways. He shows Lobsang a beautiful painting of ‘ Shakyamuni Buddha ‘and explains to him that it was painted in the fifteenth century, here in this very Tibetan monastery.  This fact interests Lobsang and he studies the 17 inch X 16.5 inch painting carefully. His teacher explains to him that the painting is made of ground mineral pigments and is painted on cotton cloth. The painting process had to be strictly according to the principles and guidelines of the holy shastras. The entire colour for the painting was prepared from minerals and plants which were derived from the lap of these very Himalayas and then broken down and hand ground into a fine powder. Sketching the drawing was a very important part of the painting. The artist needed to have a sound understanding of Buddhist iconographic and iconometric principles. The eyes of the deity were painted in the end; this signified the opening of the eyes and the completion of the painting.


By now Lobsang has forgotten about playing with his friends and his teacher has his complete attention. He gazes at the supreme Buddha as he sits in the centre of the painting, golden in colour he has a large round face and looks straight ahead. His black hair is piled up in a knot on top of his head, ( Vishnisha in Sanskrit) and crowned with a small gold ornament at the peak. A red dot (Urna) adorns his forehead and his earlobes are long and pierced a remnant from his princely life. His right arm is extended across the knee in the mudra (gesture) calling the earth to witness his moment of enlightenment. He holds a black begging bowl in his left hand, which is placed on his lap in the mudra of meditation. He wears orange and red patchwork robes, made from discarded cloth. His right arm is bare and the left is covered in the fashion of a Buddhist monk. The Buddha is seated in the ‘Vajra’ pose, with his right leg crossed over his left, on a multi-coloured lotus throne. Below the throne we see a snow lion, a peacock and he is surrounded by swirling rays of coloured light. 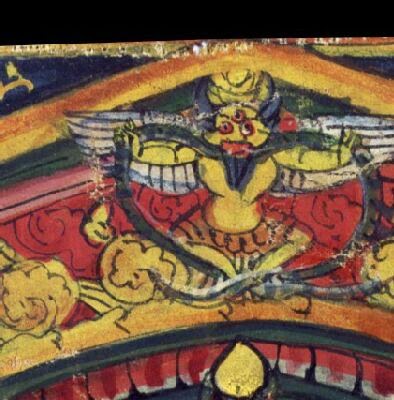 The back rest of the throne is decorated with two blue coloured lotus flowers (Utpalas), two pink mystical sea creatures (Makaras) and a yellow Garuda bird perched at the top with his wings spread out. 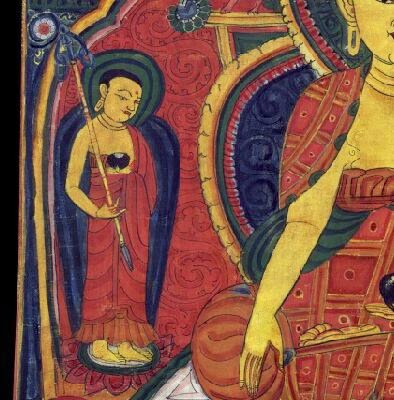 Standing to Buddha’s left is Shariputra, he is painted yellow and holds a monk’s staff in his right hand and a begging bowl to his heart in his left. 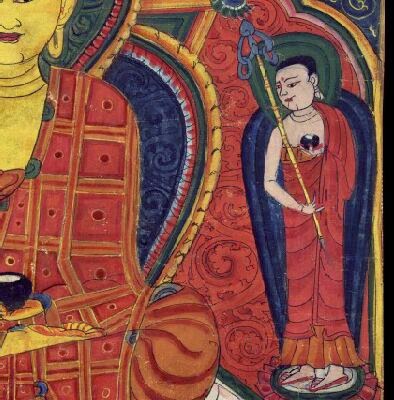 On Buddha’s right side we can see Maudgalyayana, he is painted white and holds the same objects in his hands. Shariputra and Maudgalyayana were Buddha’s foremost disciples, both wear orange robes and stand on moon shaped discs and lotus seats.

Among Buddha’s disciples were sixteen saints or ‘Arhats’ who were believed to have fully realised for themselves the Buddhist doctrine and had attained freedom from the cycle of suffering and rebirth. These sixteen Arhats were picked by Buddha himself and are also worshipped. The learned Lama explains to Lobsang, that it takes years of study and discipline to reach a state of nirvana, something that all Buddhist monks aspire to achieve. 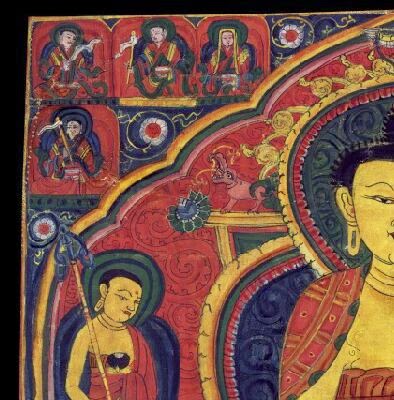 Along the top are eight of the sixteen Arhats, holding various objects in their hands. They all wear robes with long sleeves. 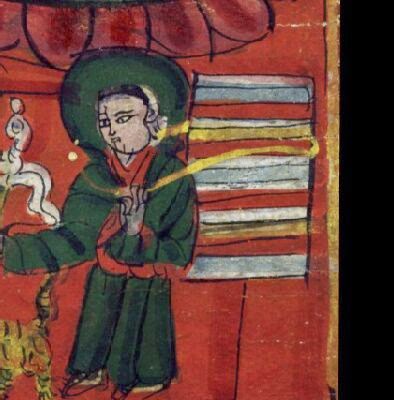 Below Maudgalyayana we can see the figure of Dharmata, who was an attendant. He holds a flywhisk in his right hand and in his left hand he holds the strap supporting a load of study books on his back. There is a fierce tiger roaming below the figure of Buddha. 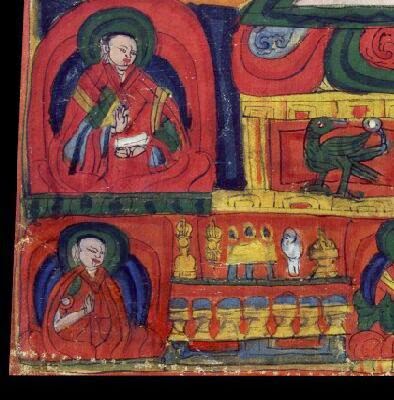 Below Shariputra on the left hand side there is a single Arhat in a sitting position and along the bottom are seven Arhats holding various objects in their hands and also wearing long robes.


Finally on the bottom left hand side of the painting, we see a monk in meditation. He sits before an elaborate array of offerings arranged in two rows. He was in all probability the sponsor of this painting.

Lobsang, lived in the monastery for many years, he studied under the guidance of his teacher, and at the age of eighteen, he left with a group of other young monks and travelled to distant places living a monastic life and teaching the doctrine of the great enlightened one.


This painting is part of the collection of the Rubin Museum in New York.

References: The Rubin Museum
Posted by preetiphilip.blogspot.com at 05:51