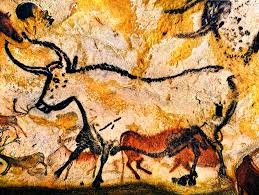 Deep,  dark, freezing underground caves. Who would want to go into these unwelcoming spaces? But they did and what we see on the walls of these caves is prehistoric art, created by early man about 40,800 years ago. Yes, that’s right! Can you imagine nomadic groups of men, women and children who braved the harsh weather and took refuge in these caves from time to time? With the help of lit torches, these hunter gatherers, created paintings throughout the length of these caves.


Was it merely man’s need to create? Or perhaps their reasons were religious, ritualistic or were these records left for other wandering groups? That will always remain a mystery. Whether it’s the Lascaux Caves, or the Chauvet Cave in France or the Cave of El Castillo (cave of the castle) and the Altamira Caves in Spain, the style of drawing was the same throughout. These artists used Charcoal, Ochre (a colour which ranges from yellow to a deep yellow orange) and dehydrated iron oxide, which has a reddish tint called Hematite to create their masterpieces. They diluted these pigments to produce variations in colour and also used them to shade their drawings, creating a strong contrast between dark and light called ‘Chiaroscuro’. They used the natural contours in the cave walls as part of their paintings, thus creating a three dimensional effect. Their subject matter was mostly animals, always drawn in profile, herds of extinct Steppe Bison in different poses, horses, goats, and wild boar. We can also see abstract shapes, as well as handprints that were created when these artists placed their hands on the cave wall and blew pigment over them to create a negative image. 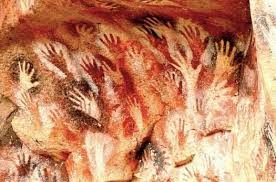 The intriguing part of this story is that, early man perceived to be so rough and crude was able to create such beautiful paintings and leave imprints of a time long gone by when our ancestors walked this harsh wilderness they called home.


The Altamira caves were discovered in 1879. It opened to public viewing in the early part of the twentieth century. During the sixties and seventies, the paintings began to get badly damaged by the carbon dioxide in the breath of the large number of visitors. Altamira was completely closed to visitors in 1977, but reopened to allow only a few visitors a day. This resulted in a three year waiting period. A replica cave, with the art and a museum has been built nearby and are open to the public. The original cave however remains closed for viewing, for conservation purposes.


The Altamira Caves are located near the town of Santillana del mar, Cantabria, Spain.